I THINK THEREFORE I AM*

Man is a thinking animal, he understands complex relationships, he reasons, imagines, and creates.
Because of this he has become the dominant species on earth.
It is not merely the size of the human brain or the number of its cells which is significant,
but rather the way man uses -- or neglects --
his initial endowment of 13,000,000,000 cortical nerve cells.
Man has a brain and is expected to use it before blindly inheriting second-hand thoughts.
It's an insult to the brain to permit it to operate at the level of a machine
or to revert to the condition of the lower animals in which inborn reflex and instinct rule.

About 25 years ago, when I was around forty (it now being April 2018), I was taking a training program at College which included an assignment, from the Psychology professor, to write a paper on how the mind works.

Scanned below is what I handed in. I'm sharing it with ORWELL TODAY readers because (if I do say so myself) I find it an easy, good explanation of the thinking process.

I would have posted it years ago but have been waiting until I'd transcribed all the captions so that readers wouldn't have to read them individually from the diagram. But if I wait until then it may never be posted because I've misfiled the original somewhere and can't find it. So all I have is the scanned version which I'd partially transcribed way back then (see in notes beneath).

Mind control is a huge theme in Orwell's 1984 -- ie, one of the two main aims of Big Brother is "how to discover, against his will, what another human being is thinking and to extinquish once and for all the possibility of independent thought".

All the best,
Jackie Jura 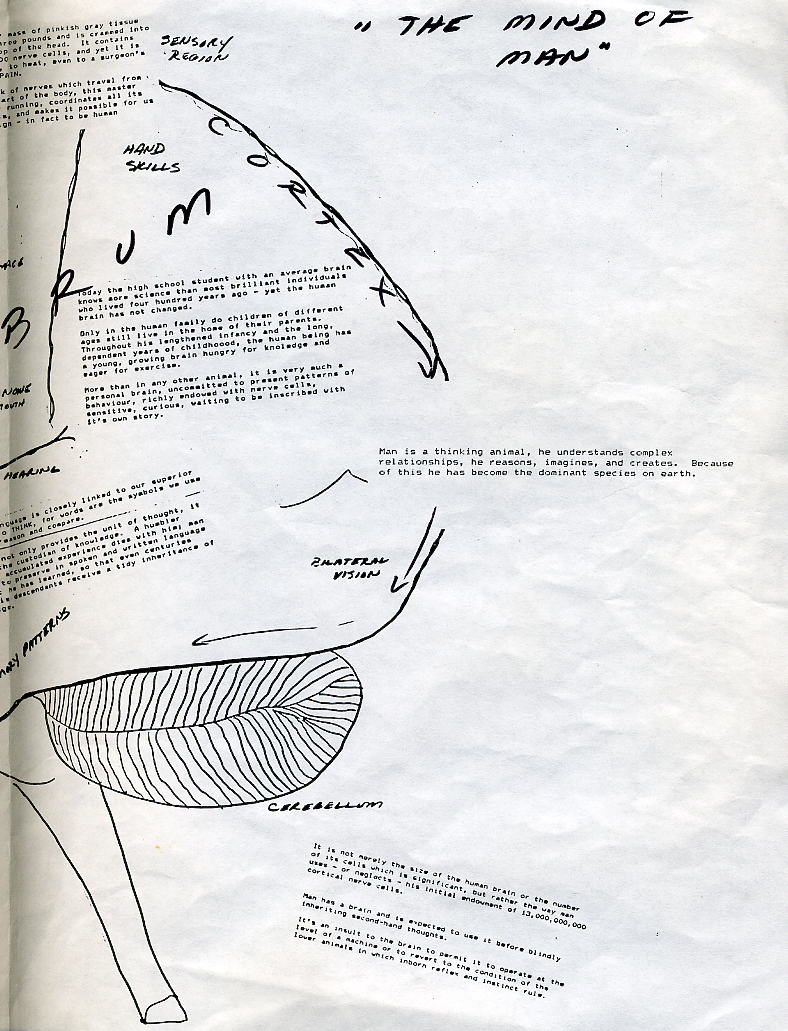 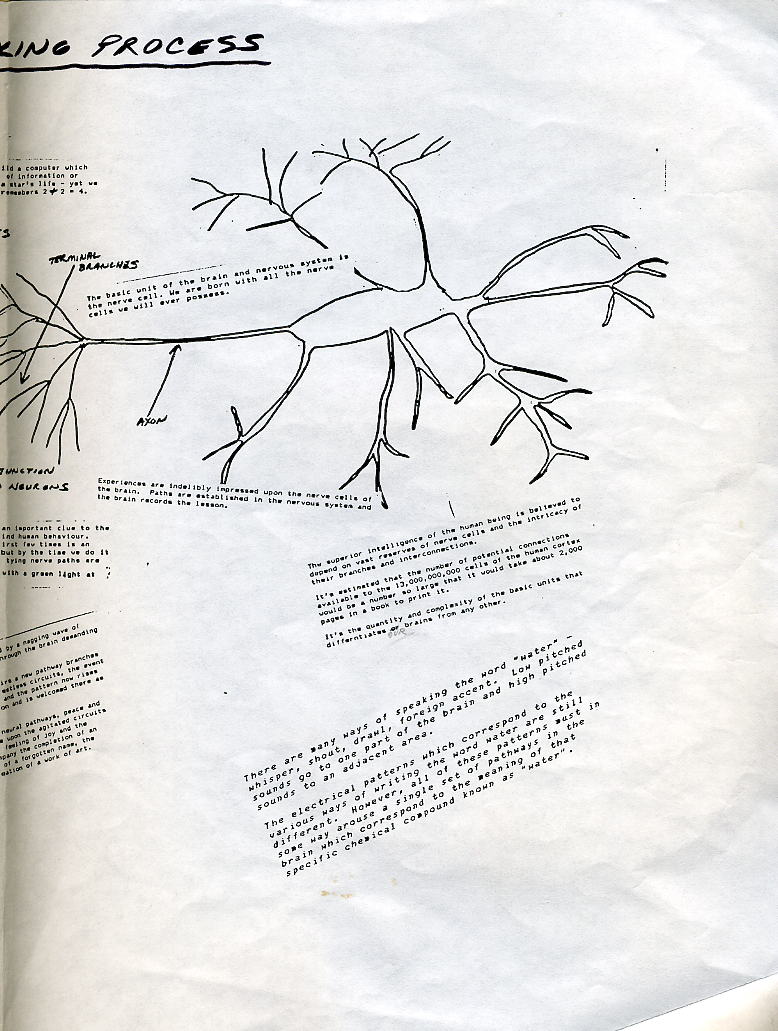 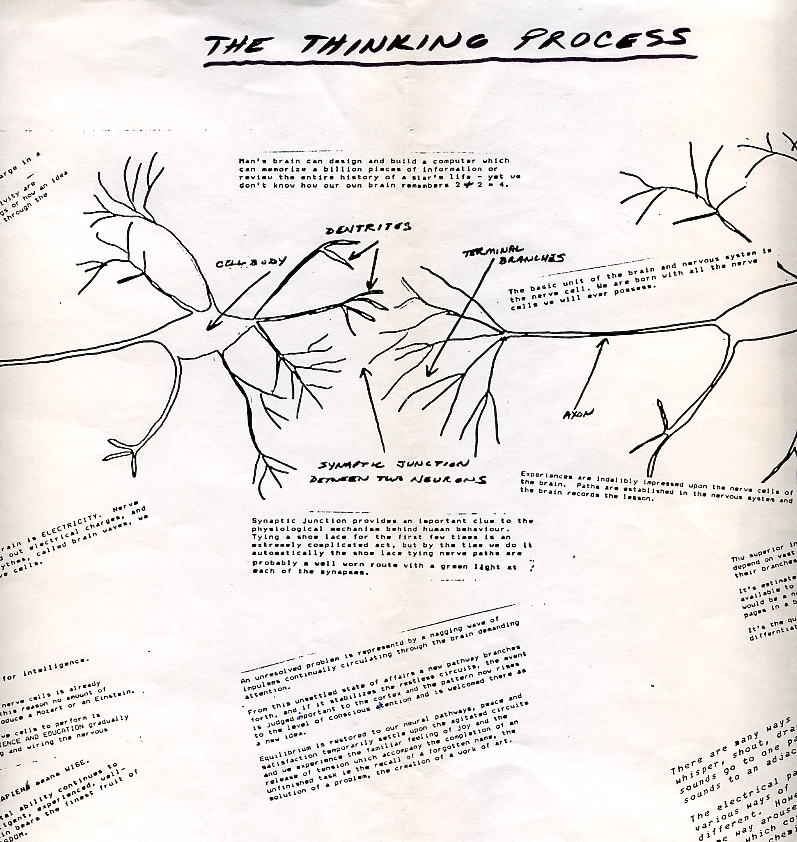 Use of language is closely linked to our superior ability to THINK, for words are symbols we use when we reason and compare.

LANGUAGE not only provides the unit of thought, it is also the custodian of knowledge. A humbler animal's accumulated experience dies with him; man is able to preserve in spoken and written language all that he has learned, so that even centuries later his descendants receive a tidy inheritance of knowledge.

Human brain is the most complicated mechanism in the world. It is made of billions of parts which are directly or potentially connected with each other.

Despite the fact that certain parts of the brain seem to be charged with specific duties, the cells of the brain are so endlessly interconnected that activity in one area always involves other sections of the brain.

A brain which is about to give birth to an idea must contain a storage system well supplied with information related to its task.

A thought is a sequence of memories arranged in a pattern which, for the thinker at least, is new.

The thinking brain cannot be a lazy brain.

Thinking is the process by which the previously stored input of the brain -- knowledge -- is summoned and then rearranged to reveal new relationships.

In the reasoning process we related a cause to its effect in order to solve problems or make judgements.

The advantage of a thinking system based on symbols is tremendous. We manipulate numbers, add and subtract, multipy and divide, without going through the laborious process of counting all the items involved in each operation.

Converted into verbal and written symbols, information is more easily stored and may be recalled at a time when the original stimulus is no longer present.

Many of our symbols are extremely complex, ie courage.

Thus from "ma-ma" to Einstein's equation "E=mc2" words must ever flow through the brain seeking their meanings.

The brain is a spongy mass of pinkish gray tissue which weighs about three pounds and is crammed into a bony cave at the top of the head. It contains roughly 13,000,000,000 nerve cells, and yet it is insensitive to touch, to heat, even to a surgeon's knife - IT FEELS NO PAIN.

Today the high school student with an average brain knows more science than most brilliant individuals who lived four hundred years ago -- yet the human brain has not changed.

Only in the human family do children of different ages still live in the home of their parents. Throughout his lengthened infancy and the long, dependent years of childhood, the human being has a young, growing brain hungry for knowledge and eager for exercise.

Man is a thinking animal, he understands complex relationships, he reasons, imagines, and creates. Because of this he has become the dominant species on earth.

It is not merely the size of the human brain or the number of its cells which is significant, but rather the way man uses -- or neglects -- his initial endowment of 13,000,000,000 cortical nerve cells.

Man has a brain and is expected to use it before blindly inheriting second-hand thoughts.

It's an insult to the brain to permit it to operate at the level of a machine or to revert to the condition of the lower animals in which inborn reflex and instinct rule.

Hundreds of thousands of neurons discharge in a single operation.... 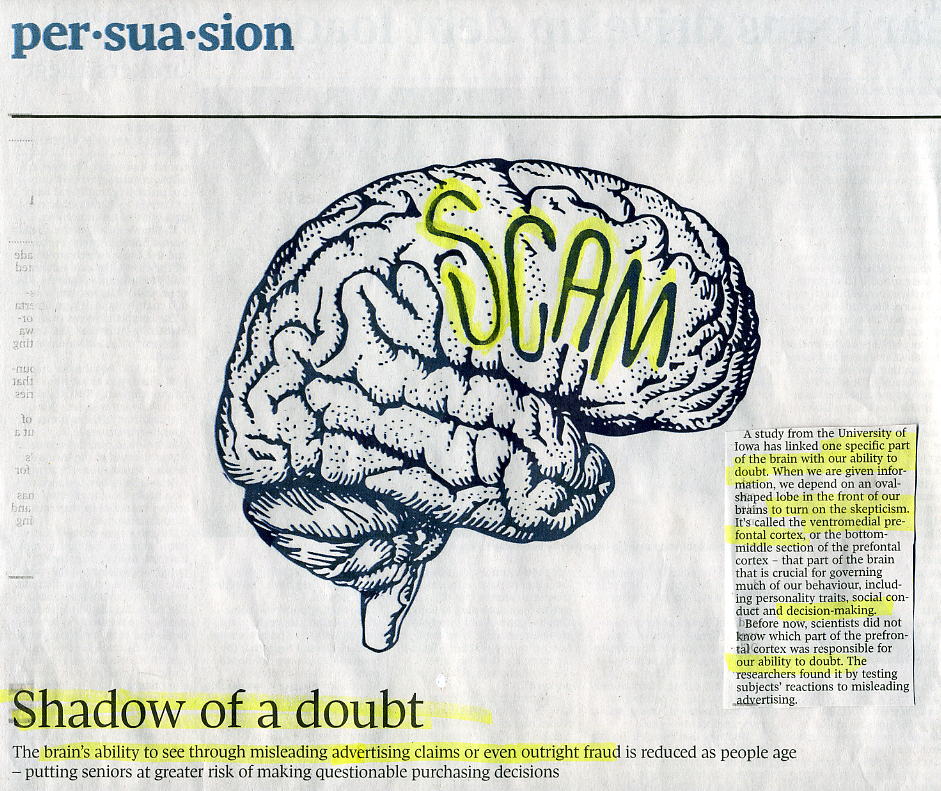 SHADOW OF A DOUBT

Persuasion -- The brain's ability to see through misleading advertising claims or even outright fraud is reduced as people age -- putting seniors at greater risk of making questionable purchasing decisions. A study from the University of Iowa has linked one specific part of the brain with our ability to doubt. When we are given information, we depend on an oval-shaped lobe in the front of our brains to turn on the skepticism. It's called the ventromedial pre-frontal cortex, or the bottom-middle section of the pre-frontal cortex -- that part of the brain that is crucial for governing much of our behaviour, including personality traits, social conduct and decision-making. Before now, scientists did not know which part of the pre-frontal cortex was responsible for our ability to doubt. The researchers found it by testing subjects' reactions to misleading advertising.

I THINK THEREFORE I AM

watch WHAT IS TWITTER?, by Jackie Jura, One Radio Network, August 2011, YouTube (...Thought is crime -- thoughtcrime. It's a crime to think...)
COMMENTS: 1)by Vebinz: Thank you for posting. I'm a big fan of the OrwellToday site. 2)Neilemac: Elated to be one of the few non-twits left; don't go right into fb either. ;-) Let's hook-up with that awesome voice who created http://www.orwelltoday.com/ and rediscover more about the Orwellian world of 1984 in which we presently reside three decades after the date in his prophetic title and provocative foresight into our present reality citing "news-speak!" What 'twits,' eh; being from Canada we've heard that colloquial expression decades before "twitter" appeared in cyberspace to capture (reach) the world's consumers by the billions. Conditioning minds; that's how "NEWSPEAK" does it, in the book, n'est pas? (isn't it.) 3)Rubilucifer: I'm a huge fan of the site. Jackie is a great woman who has got a great handle on the conspiracy.

THINKING INSIDE YOUR SKULL (...Not even the few cubic centimeters inside your skull is safe! There are at least 100 patented mind manipulation and control technologies that are being used in a variety of ways, right now, today, on the unsuspecting public! How many exist that are "classified" is anyones guess!...)

INDIVIDUAL A THREAT TO THE PARTY

*"I think, therefore I am", Wikipedia, (Cogito ergo sum is a Latin philosophical proposition by Rene Descartes usually translated into English as "I think, therefore I am". The phrase originally appeared in French as je pense, donc je suis in his Discourse on the Method, so as to reach a wider audience than Latin would have allowed. It appeared in Latin in his later Principles of Philosophy. As Descartes explained, "we cannot doubt of our existence while we doubt...." A fuller form, penned by Antoine Leonard Thomas, aptly captures Descartes's intent: dubito, ergo cogito, ergo sum ("I doubt, therefore I think, therefore I am"). The concept is also sometimes known as the cogito. This proposition became a fundamental element of Western philosophy, as it purported to form a secure foundation for knowledge in the face of radical doubt. While other knowledge could be a figment of imagination, deception, or mistake, Descartes asserted that the very act of doubting one's own existence served - at minimum - as proof of the reality of one's own mind; there must be a thinking entity - in this case the self - for there to be a thought. )

1.Winston's Diary (...Whether he went on with the diary, or whether he refrained from writing it, made no difference. The Thought Police would get him just the same. He had committed - would still have committed, even if he had never set pen to paper - the essential crime that contained all others in itself, Thoughtcrime....)

5.Big Brother's Pyramidal New World Order and 16.Ministry of Truth (Lies) and 17.Falsification of Past

18.Newspeak (..."Don't you see that the whole aim of Newspeak is to narrow the range of thought? In the end we shall make thoughtcrime literally impossible, because there will be no words in which to express it. Every concept that can ever be needed, will be expressed by exactly one word, with its meaning rigidly defined and all its subsidiary meanings rubbed out and forgotten. Every year fewer and fewer words, and the range of consciousness always a little smaller. There's no reason or excuse for committing thoughtcrime....The whole climate of thought will be different. In fact there will be no thought, as we understand it now. Orthodoxy means not thinking - not needing to think. Orthodoxy is unconsciousness."...)

40.Electric Shock Brainwashing (..."We, the Party, control all records, and we control all memories. Then we control the past, do we not?"... "But how can you stop people remembering things?" cried Winston again momentarily forgetting the dial....)

42.Big Brother Tells Why (...Obedience is not enough... Power is in tearing human minds to pieces and putting them together again in new shapes of your own choosing....)