On the way to catch the underground to our next destination I got a little wink from Orwell - symbolically of course - which means he must have liked his flag flying at the Senate House. It happened as we approached an intersection just past the British Museum. The street sign on the side of a tall building said "...ORWELL" for a second or two before we got close enough for the other letters in its name to emerge (which I never did register in my brain). But the fact that Orwell's name had appeared before my eyes at that particular time struck me as another one of those amazing "godincidents" that keep happening in life. I pointed it out to Zoe who was busy studying the A to Z at the time. She thought it was pretty amazing as well.

Our next destination was to a different area of London and a different time period in Orwell's life. We travelled by underground to Hampstead (see Andy MacDonald's map) where Orwell lived from October 1934 to January 1936, when he was thirty-two years old.

By that time he already had three books to his name, Down and Out in Paris and London, Burmese Days, and A Clergyman's Daughter but he still wasn't making enough money to live off his writing. He'd been teaching for a year and a half at a boys' school south of London but the previous winter he'd ridden his motorcycle through freezing rain to deliver A Clergyman's Daughter to his book agent and had come down with pneumonia. He'd been recuperating, writing and tutoring at his parents' home in Southwold through the spring and summer. Now he was at the point in his life where he wanted to socialize and mingle with other writers and intellectuals and through a letter of introduction to the owners he got a job as bookstore assisstant at Booklovers' Corner in Hampstead.

After getting off the underground we strolled leisurely down the High Street of Hampstead which is a very trendy area full of unique shops and cafes and interesting-looking flats and houses. Zoe noticed in the A to Z that a nearby park had a statue of Karl Marx "if we wanted to go and see". I almost choked on my ice-cream cone and told her I'd much prefer going to see a statue of George Orwell - one of England's greatest writers - than of an author no one's read but everyone talks about, and who was the figurehead of a political system Orwell spent the last fifteen years of his life actively opposing. But to this date there are no statues of Orwell.

Just this past winter I'd read Keep the Aspidistra Flying which Orwell wrote during his fourteen months in Hampstead. The book's main character, Gordon Comstock, is a struggling author working in a bookstore where "there were highbrow, middlebrow and lowbrow books, new and second-hand all jostling together, as befitted this intellectual and social borderland". The book is so obviously autobiographical that a person reading it experiences a feeling of being a confidant of Orwell's in whom he shares his innermost thoughts and feelings. So I was really looking forward to seeing if the bookstore in real life had any resemblance to how I'd pictured it while reading Aspidistra. Before we knew it we'd reached the bottom of the hill and were literally standing in front of our destination, "Booklovers' Corner": 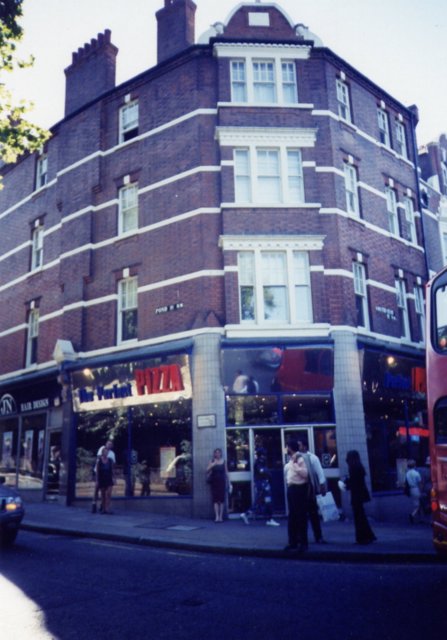 In the above photo Zoe is standing in front of what was once the bookshop named "Booklovers' Corner" on the corner of Pond Street and South End Green. Above her is a plaque commemorating Orwell's time here. It says: "GEORGE ORWELL: WRITER - 1903-1950: LIVED AND WORKED IN A BOOKSHOP ON THIS SITE: 1934-1935".

It's now a clean, modern Pizza House, which to me is symbolic of how little public acknowledgement Orwell gets compared to other writers like Marx, as was mentioned earlier, and Dickens who has a museum near the British Museum. Why isn't there a museum for Orwell? His words get flashed around all over the place by the whole world, eg "BIG BROTHER IS WATCHING YOU" but his meaning has been totally distorted. There should be a place where the public can learn the true meaning behind "BIG BROTHER" and realize that it isn't about sex-starved airheads loving every minute of being on camera 24/7 for all the world to see. A museum to Orwell could house all his books and his existing manuscripts and all his quirky collectibles. It could be drawn to peoples' attention that Orwell set the style for the tweed-jacketed university types with leather patches on their elbows. And what about all the new words he invented, like doublethink, thought police, crimestop, facecrime and the phrases he coined like "At 50, everyone has the face he deserves" to name a few.

Or if Booklovers' Corner couldn't for some reason be a museum, then why, at least, isn't it a tourist-attraction bookstore promoted as "carrying the largest selection of Orwell's writings in the entire world - If we don't have it, he didn't write it" or something along those lines. I went into the Pizza parlour to see if I could imagine it as it used to be but it didn't seem to hold any Orwell ambience at all.

For his first six months in Hampstead, Orwell had lived rent-free with the owners in a flat above the bookshop. As I looked at the windows above Booklovers' Corner (as I still want to call it) I was wondering which window was his. Here's a description from Michael Sheldon's biography, Orwell: The Authorized Biography:

"Orwell's lodgings above Booklovers' Corner were plain and dark, but he could not have asked for a better landlady than Mrs Westrope, who was uncommonly considerate. When her new lodger arrived, she showed him to his room and kindly enquired whether there was anything he 'particularly wanted'. He replied, 'The thing I most want is freedom'. Interpreting this to mean a particular kind of freedom, she asked, 'Do you want to have women up here all night?' He quickly tried to reassure her on that point, giving her a firm, 'No'. ...Jon Kimche, a young assistant in the bookshop, remembered Mr and Mrs Westrope as a 'refined, middle-aged couple' who were 'almost too nice to be true'. Kimche, who later became an editor at Tribune, thought that the couple behaved more like friends or family than employers..."

"According to Kimche, his fellow worker introduced himself as 'George Orwell', but also used his real name at the shop. (He was simply 'Eric Blair' to others who met him in this period, but he may well have enjoyed creating a little confusion for some people by using both names). He and Kimche got along reasonably well, but they did not see a great deal of each other because they usually worked at different times of the day. It was Orwell's job to come down in the morning and open the shop at eight-forty-five. He would stay for about an hour, and then Kimche would take over until two p.m., at which time Orwell's four-hour shift would begin."

But even though the bookstore is no longer there - and thus no one to pass along anecdotes - Orwell foresaw the void and left for posterity's sake his own words to help us feel the ambience I was looking for. In 1936, while the experience was fresh in his mind, he wrote an essay describing what it was like working in "Booklovers' Corner". He called it, appropriately enough, Bookshop Memories. Read and enjoy.

go next to 10.ORWELL'S 77 PARLIAMENT HILL or HOMAGE INDEX

ORWELL'S COMMON FRIEND TRESSELL (...It's ironic, anti-Communistists and anti-Marxists as Orwell and Common were, that Common's forehead was used as a model for the statue of Karl Marx that sits on Marx's London grave in Highgate Cemetary...)